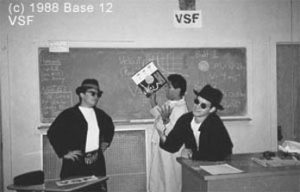 For VSF, even though the music is electro, it is a spiritual, emotional and a story being composed.   Sequencing is used, but most of what you hear on the music is being played by hand during the entire track. Just like the original Velocity, Speed and Force video many of you have seen. On the new vinyl release B124, both songs are done this way.

The song “One Way Ticket To Mars” was originally written in 2010 and “I’m Not Like You” is much older and written around 1994 (Three robots disagree on what the purpose of a robot is). I re-recorded them from scratch in 2016-2017, using the same analog synths (no PC plug-in synths). Also, another new track to be released in Germany titled “Los Angeles Funk (Electrofunk)” was written in 2016 and recorded before the Mars track.

We look forward to releasing many tracks this 2017 year. We appreciate your support and appeciation of our art. We thank you very much and hope you take this new adventure with us.

(This Text was Taken from the original ebboy.com Records website in 2003)

Smax and J-vibe started pop-locking and breaking back in 1982. We used to go out to downtown Los Angeles on Broadway and spend time at the video arcades. There used to be two arcades across the street from each other by 6th street. We had a “ghetto-blaster” (later referred to as “Boom Boxes” for politcal correctness…I still prefer the prior). We were riding several different music waves at the time: Electro, Electrofunk, Italo-disco, New Wave and Disco.

Up until 1984, we started noticing that the electrofunk music was getting silly and seemed to be transforming into a commercial joke. Commercials on television were showing pop-locking Flinstones, Grandma’s and it seemed every music video had break dancers/pop-lockers in them. The music was even getting worse. Lyrics such as “Dream dancing on the floor, you’re a break dancing magician so you know you can do it…” and “Everybody all around is break dancing to the sounds, clap your hands and stomp your feet, come on people feel the beat.”

It started feeling like being a break dancer was actually something of a joke. I remember in 1983 walking with the blaster and playing “Pack-jam”, “Clear”, “Magic Mike”, “Radio Active” and “Nasty Rock.” We felt cool playing those jams loud. In mid to late 1984, we started feeling strange hearing songs like “Break Dance Party” by Break Machine and “Woodpecker from Space” by Video Kids. There was a change in the production of music which is expected, but the electrofunk we loved was vanishing. Commercials on television showed the cereal “Snap, Crackel and Pop.” Pop-locking Mickey Mouse, Smurfs, Flinstones and even the footbal teams were making rap tracks and pop-locking really bad. very young kids (6 – 9 year olds) pop-locking at church fund raisers, carnivals and tv shows. In 1985, the really starting hitting the ground. Just about every dance school was offering pop, lock and break classes. We would walk past Jazz dance schools and they had signs on the window “Pop and Lock classes every Wed. night, great way to obtain flexibility – Seniors Welcomed” Smax and I looked at each other and knew it was the end of our definition of what it mean to be on the street with electrofunk.

We had made some tracks during the early years on our homemade synths. Since we didn’t have a drum machine, we used to use “beat track” dub plates. We would spend 30 minutes recording a loop on reel to reel, then spend several hours cutting up the tape and matching the beats. The final reel to reel tape would then be taken to the pressing plant and we would make an acetate (now called Dub Plates). We would play the acetate on a turntable and play the music on the synths. We had a TEAC 4-track reel and we would bounce tracks around and end up with some cool music. Releasing a 12 inch was always the ultimate goal, but the cost, distribution and over-all process made it impossible for us. We were 2 barrio brothers from East LA with just dreams and no finacial connections.

Forward to 1987: The music scene was really changing by this year. The sound of gangster-rap was emerging. There was the Miami-bass sound coming from people like Maggatron and DJ Debonnaire. When I heard “I’m your audio tech” by Juan Atkins, I knew it was a good time to get VSF released. There was a slight re-surfacing of some electro stuff at that time. We contacted Sam at JDC Records. The only problem was that we didn’t show him VSF, we gave him a cassette with Hi-NRG tracks. He liked the music and wanted to hook-up with us. Sam wanted to make a record himself for a long time. He said he had ideas and that with our talent, we could produce some cool stuff.

During the next year, we explored many different styles of music. Then, JDC started a new label called “Dunk Yer Funk.” The local market for electro/rap was strong. Jim from JDC asked Sam to make a track for the “Dunk Yer Funk” label. When Sam brought up the idea, we realized that “Velocity, Speed and Force” was the perfect track. We played it for Sam and he liked it. He suggested that it needed to be re-worked and recorded cleaner. We spent a couple of weeks reworking VSF. The only recorder we had access to was a 4-track TEAC 1/4″ that Smax and I bought from a rock-n-roll guy in Hollywood. The quality on the reel tape was not acceptable by JDC for the vinyl. Especially when there were other artists recording on 24-track 2-inch tape. Sam knew a guy by the name Charles Lamont (he did many tracks for JDC and various artists). He had an 8-track studio in San Pedro. We figured that an 8-track at 15 ips was better than a 4 track at 7.25 ips. Sam booked some time with Charles on off we went.

Once we had the final version, we took it and presented to Jim at “Dunk Yer Funk.” He liked it agrees to release it. The release was supposed to be before “Feel My Bass” by DJ Matrix, but some problems with the mastering of the record delayed it. Once DJ Matrix was released, we had to wait a couple of months before they could release the next single on D.Y.F. The year was now 1988.

Once the single was released, it didn’t get the response we had hoped for. Many sellers were turning it down in favor of songs like “Sally, That Girl” and “Shake it, Shake, Shake It.” We promoted the record and performed at several night clubs. The response was also interesting. Many of the clubs we performed at responded with mild results. The result was a total pressing of 3,800 records. In the months that followed, we brought the promotion to an end realizing that people were more interested in tracks like “It takes Two” or “Boot the Booty.” The result was a total pressing of around 3,800 records. Many copies started showing up at JDC as “Returns”, so those copies ended up being re-melted to press up Aerobic Music Mixes or as inserts to protect other records from being damaged (so sad I tell you!). I want to say that about 2,000 copies might have survived.

The sound of Freestyle-Miami was also in coming into force. Stevie B, Freestyle, Cynthia, Johnny O and all those “Greg D’, Timmy T, Johnny O, Frank O, Tony G, Chris T” and so on…. The brain could only take so much before you want to plug your ears up and forget about music. We called it quits and realized that technofunk had come to an end in the ears of the public. Don’t get me wrong, we loved freestyle but just like electrofunk, was going a bit too commercial for us.

During the next 10 years, we were involved in making dance music. But, let’s move forward to 1998. In 1998, we gave birth to an experiment group we called 128bit Bboy. It was a laid back approach to electrofunk. It was a slower/funky sound that was totally inspired by the pop-locking spacefunk sound of Los Angeles in 1983. 128bit Bboy included a friend of named Victoria Nguyen. She was more of inspiration for the tracks that anything and represented B-crowd in Garden Grove, CA. Now, in 2003, we are starting again and we are going to do what we love which is making the technofunk music.

We made two new songs for the 2003  release. They are “Taking Back Control” and “Uanorpa”. Helping us with this release is an artist named Hsky. She is an abstract artist that paints some really cool stuff. Her website is at www.FH0.com. – (Written in 2003)

Your cart is empty